Impossible Glossary is an editorial project by hablarenarte, accompanying the CAPP project until 2018. The compendium of this digital edition of 2016 is comprised of seven independent chapters, available for online and as pdf, in English and in Spanish.

In Spain there is still does not exist a theoretical framework around collaborative artist practices such as it has developed in the Anglo-Saxon context. But in recent years, Spanish practitioners and academics have started creating a discursive body that derives mainly out and artistic, social and activist practice itself and which is strongly influenced by a political awakening of citizenship.

But as the theory derives out of the practice, there is however a discursive interference resulting in a covert cacophony: it seems as if we are talking about the same when debating about "collaborative artistic practices", but actually we do not understand each other. Our contribution to this incipient debate is to provide a vision of this heterogeneity of views and opinions, but structuring the discussion through a set of terms we have identified as key.

Once established this framework, we have worked for this edition of 2016 of the Impossible Glossary with 8 authors on the key concepts agents, autonomy, authorship, collaboration, work, return and context. In addition, and together with Ana Garcia Alarcon, we conducted 14 interviews with artists and artistic collectives about the same key words. This material forms the basis of the compendium that will accompany the CAPP project until 2018, expanding continuously with new voices and unusual views.

Impossible Glossary is published in Spanish and English, in order to give voice to the Spanish context in the international debate and to contrast the Spanish points of view with other countries CAPP network partners: Germany, Finland, Hungary, England and Ireland.

There are hardly any English translation of writings about Spanish texts. In an attempt to remedy this lack, we put this set of voices on the table in order to show what is happening and growing today in Spain.

The content of Impossible Glossary will expand over the coming years and will be published in digital format through the web pages www.cappnetwork.eu www.hablarenarte.com. A selection of all texts published on paper in November 2018.

This publication has been realized thanks to the support of the Region of Madrid.

CAPP is an ambitious transnational cultural programme focusing on the dynamic area of collaborative arts. The overall goal of CAPP is to improve and open up opportunities for artists who are working collaboratively across Europe, by enhancing mobility and exchange whilst at the same time engaging new publics and audiences for collaborative practices. 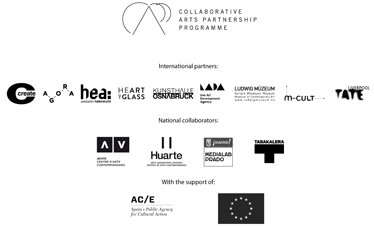