Curators' Network: Let us be known; let us be seen, and let us shine

“Let us be known; let us be seen, and let us shine”, takes its name from a press release for an exhibition of Fine Art Students of the University of Massachusett, in 2009, titled “Shameless self-promotion”. Based on this title we want to reflect with this event on the experiences generated during the first three years of our network.

Between June 27 and July 28 2013 Curators’ Network organizes a showcase of the outcomes of its recent activities at Intemediae, at the Center for Contemporary Creation Matadero Madrid. Curators‘ Network seeks to give this event an eminently international focus, inviting both curators and artists who have participated in the various meetings of Curators’ Network, as well as cultural agents who are interested in collaborating with the network.

Curators’ Network presents itself during those three weeks of exhibitions, talks and discussions as a generator of new content and activities, a resource for intellectual discourse, attractive to members of the network, art professionals and general public.

The members of Austria, Hungary, Poland and Romania issue three curated programs / alternative exhibition formats featuring artists, that have been participating at the activities of Curators’ Network since 2011. On the other hand, hablarenarte: organizes three seminars that trigger panel talks, round tables and open discussions around issues that we have been repeatedly confronted with during our collaboration within the network. 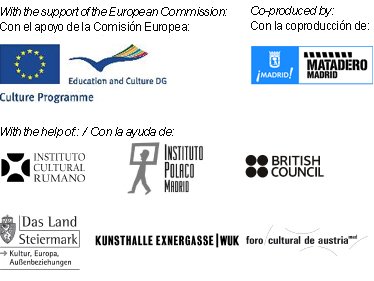