Collective participation in times of confinement

Care and solidarity networks facing COVID-19 are spreading among families, neighborhoods and groups, generating mutual support and proposals to try to cushion the effects of confinement and the health and social crisis. The construction of alliances and the strengthening of ties highlights the power of these forms of organization.

What forms is collective participation taking in times of confinement?

Makers and healthcare personnel, hackers and the education sector are examples of these forms of liaison that now, more than ever, bring to light the importance of participation and collaboration in the construction of processes, networks and collective identities.

Thus, in the midst of the development of the European Cultural Creative Spaces and Cities project –in which hablarenarte is taking care to highlight, analyze and extract proposals for cultural policies in the field of formal and non-formal education based In the active participation in the classrooms by the boys and girls–, the project has been truncated due to new demands that also demand responses from the cultural sector. Essential measures for today and tomorrow.

How are the consequences of confinement and its effects on children who have stopped going to school being dealt with collectively?

Experimenta Educación After the closure of schools and the initiation of containment measures, the need to attend kids needs becomes more than evident. The development of participation strategies has suffered a shift from the territory of the classrooms to the online space. Thus, from “Experimenta Educación-Vallecas” (Medialab Prado, one of our partners within the framework of the project), a new plan has been drawn up using technological tools. After several dialogue sessions with schools, tutors and families to explore work continuity options, the plan combines this new challenge with that of fighting the technological gap, a problem that affects many of the families participating. With the support of resources and technical advice from the La Kalle association and the skillful work of the mediation team, the ideation and construction sessions continue to be carried out online, through videos, videoconference tutorials and email with the boys and girls, families and educational staff.


MovilizaT-ED, educational communities of device reuse in times of emergency With the mobilization against the technological gap that affects the neighborhood, this solidarity initiative for the reuse of disused phones and tablets has been launched, as well as the alliance with taxi drivers volunteers for delivery and entities such as guifi.net or red.es to cover the internet connection.


Virtual hackathon In addition, the project has a second layer of participation involving the neighborhood fabric. This phase, which consists of proposing projects to be built collaboratively, has been merged with the #VenceAlVirus Hackathon movement, an online meeting that aims to involve scientists, academics, innovative professionals and civil society with the aim of seeking answers to the great challenges posed by COVID-19. This initiative has been running since April 4 and is organized by working groups, with the ultimate goal of caring for people in the event of epidemics or situations of isolation in the coming months.


Cultural and Creative Spaces and Cities is an international programme that highlights those grassroots artistic and cultural initiatives that actively transform public spaces and cities, and from this practice proposes a compendium of recommendations and proposals to be implemented in the European Commission. The international organisations involved are: 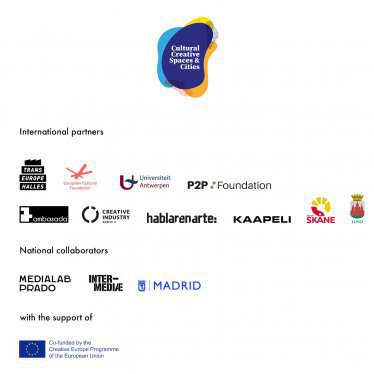