As a final touch to the European CCSC project, a long-term investigation on cultural policies for, by, with children, which has orbited around the role of children in cultural spaces and institutions, we have invited artists Trish and Dan Scott already his family to reflect with us on the norms, roles, dynamics and abilities within and between family units and the generation of less adult-centered relationships.

Sister Cities/Twinning is focused on the premise of spending a weekend with two other families, all in separate places, and using intercultural and intergenerational dialogue and exchange to surface and reflect on norms, roles, dynamics and skills within and between family units. Over the course of a weekend we will collectively  investigate tactics for play, exchange and mutual learning which re-think notions of routine, distance, difference,hierarchy and expertise.

The title Sister Cities/Twinning references a form of relationship building, conceived after the Second World War in 1947, where links between European towns (often former foes) were established to foster friendship and understanding among different cultures as an act of peace and reconciliation. Brexit and thesevering of ties between the UK and the rest of Europe, as well as alienation and fear engendered by the Covid-19 pandemic, have revealed deep inequalities and divisions within, and between, European countries (the UK included). However, these fissures have also encouraged new modes of connection, and a strong sense of solidarity, between those who value exchange and friendship, with communication technologies such as Zoom playing a significant role in this dialogue. Twinning engages with this emergent spirit, drawing on these older, civic models of cooperation and friendship to find novel ways to engage and connect.

Sister Cities/Twinning builds on a previous project by Trish and Dan Scott, Spaceship School, which tested out the possibility of establishing an alternative art school at Tate Britain where children taught adults based on their passions and interests.

Trish Scott is an artist, curator and researcher. She works collaboratively, using dialogue and exchange to generate processes and structures which rethink traditional hierarchies around knowledge production and create space for multiple voices. Her work takes the form of exhibitions, discussions, installations, performances, publications and workshops. Trish has carried out projects and residencies including for Binaural Media, the Dakar Art Summit, the Koestler Trust, Tate and the Whitstable Biennale. Trish is currently Engagement Curator at Goldsmiths Centre for Contemporary Art. Previously she has developed intergenerational programming at Tate, and has worked at Turner Contemporary both as Research Curator and Curator for Digital Collaboration. Trish holds a PhD in Fine Art from the University of the Arts, London. Her doctoral research project Socialising the Archive examined questions of authorship in relation to how knowledge gets generated and communicated, particularly in relation to participatory art projects and their mediation. Trish has taught at the Royal College of Art, Goldsmiths, the University of the Arts London, University of the Creative Arts, and for the last 4 years has mentored at Open School East, an alternative art school in Margate.

Dan Scott works across installation, performance, and participatory practice. His projects include Liberation Through Hearing, outside the Royal Academy in London, Yesterday at Harewood House in Yorkshire, Advantageous Recordings at the De La Warr Pavilion, the monthly event Athelstan Sound in Margate, the Sonic Trails series at Tate Modern, and boat-house-theatre (with Tom Adams) at Arc Theatre in Stockton. Dan also works as a sound designer and musician and has collaborated with a number of artists (including Caroline Bergvald and Barbara Walker) on their projects. Dan is a visiting lecturer at The Royal Central School of Speech and Drama where he tutors in sound and scenography. Dan has a PhD in Sound Art from the University of the Arts, London.

Samuel Scott: I am a boy/kitsune living by the sea who wishes to live in the mountains on a flying narrow boat. I have only started to like art this past year. It has kept me happy during lockdown. I like Japanese anime [a lot] and have a cat called Koshka.

ABOUT THE FAMILIES IN COLLABORATION:
Nacho Bilbao is a musician, performing artist and facilitator. He develops his work in projects that mix music, scene and groups of people. He is part of The Cross Border Project team. He collaborates in professional theater productions as a sound creator and music director, works with communities using theater and music as a means of intervention, and develops personal research on play as a composition and creation strategy. In this exchange residence, he participates with his family: Almudena Mestre, works on strategic design and innovation as a project manager and facilitator. She has a higher degree in Architecture from ETSAM and has studied acting at the Municipal School of Dramatic Art. For ten years she has developed creative, scenic and artistic projects that are nourished by her double training, with different companies, artists and ventures. With the company of which she is co-founder, La Belloch Teatro, she achieves notable national and international success, touring shows in Spain and Latin America as an actress, and taking care of production and set design and tour. Aitana is two and a half years old. She likes mechanisms, invented songs, swinging very hard, food, costumes, animals in general and dogs in particular. Silvia is two and a half years old. She enjoys building towers, riding her bike, made-up songs, food, repetition-based humor, watering plants, and collecting rocks.

Pilar Blanco studied Art History and tries to perfect her crawl swimming style. She works as a child engagement consultant at Save the Children and loves listening to Nina Simone on Saturday mornings. Guimbo Santos plays the guitar and studied philosophy a long time ago. He works making maps for air traffic control in Spain. Max is eleven years old and draws comics all the time. He loves dogs and he wants to be an actor. Gabriela is nine years old, born on an island and plays her purple ukulele. She loves to do gymnastics and listens to "Blinding Lights" on a loop. 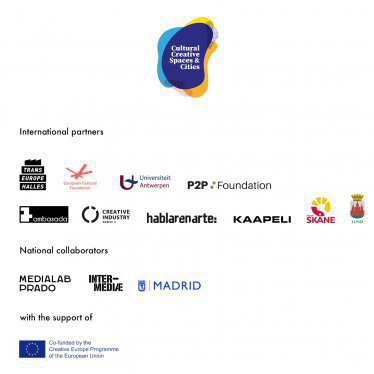